WHITEWATER PRESERVE: THIS HIDDEN NATURAL GEM IS JUST 30 MIN. AWAY 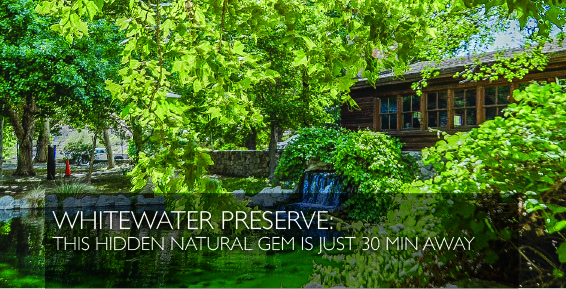 The Mission of The Wildlands Conservancy (TWC), who owns and manages the Whitewater Preserve, is to preserve the beauty and biodiversity of the earth and to provide programs so that children may know the wonder and joy of nature. Founded in 1995, this Conservancy has become California’s nonprofit leader in providing free outdoor education opportunities for the state’s youth. TWC, which exists through donations, has 15 preserves in California, totaling 143,000 acres. The 2,851-acre Whitewater Preserve is located 4.5 miles from the Whitewater/I-10 Freeway exit. In the 1930’s, a portion of this area was developed as a trout farm. There were also 40,000+ acres of BLM land leased, in this canyon, to a Cattle Company for grazing their herd.

The Preserve, which is free to the public, is surrounded by the Bureau of Land Management’s San Gorgonio Wilderness, and includes the year-round Whitewater River and rich riparian habitat that hosts two endangered birds, the Southwest Willow Flycatcher and the Least Bell’s Vireo. Over the past ten years, the Conservancy spent over 2.3 million dollars transforming the Whitewater River and Preserve. They were able to strike an agreement with the cattle company and the BLM where the conservancy bought the lease for an undisclosed amount and the cattle were removed from the canyon. The black water cattle wallows were restored to crystal clear waters. They removed 19 neglected houses and commercial structures, replaced diseased non-native elm trees with native sycamores, cottonwoods, flowering ash, alders, narrowleaved willows, and native shrubs. They purchased the trout farm and rebuilt one of the farm buildings into the current Ranger Station Visitor Center, which has an indoor dining room and public restrooms.

Other visitor facilities include individual and group picnic areas, campgrounds and restrooms, paver paths around the ponds for the elderly, and a children’s wading pool. This canyon has a robust population of bighorn sheep, often spotted on the sheer cliffs, as well as deer and bear. It is also an important wildlife corridor between the San Bernardino and San Jacinto Mountains. There are many trails, with varying lengths and difficulty, including a path leading to the Pacific Crest Trail.

The preserve is open daily from 8 am to 5 pm with the exception of Thanksgiving, Christmas, and New Year’s Day, or in the event of dangerous weather conditions. Free permits for preserve camping, backcountry trip parking, and after hours hiking are available at the preserve ranger station during open hours, in person or by phone. For additional information, or to reserve an interpretive program or the campground, call the preserve at (760) 325-7222.

Donations are always greatly appreciated. It’s about a 26-mile drive, so pack a lunch and take a look at the weather – if it is too warm or cold you can eat choose to eat indoors.