Vivien And Michael McGuire: A Drive For Change 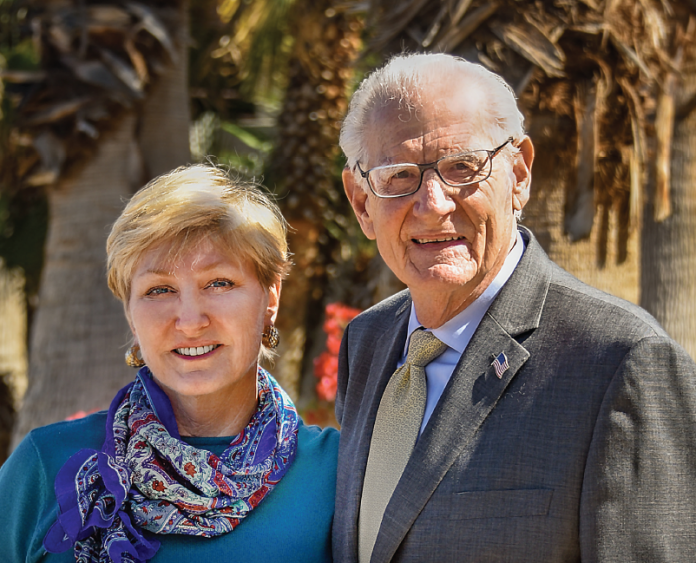 Many people would feel intimidated about starting an entirely new career in their late forties. It can feel daunting to set aside a lifetime of work and expertise in one particular field. But Michael J. McGuire, Attorney-at-Law, is proof that a big mid-career shift is not only possible, but also exciting!

Michael served in the United States Army before beginning a career in marketing, working for companies like Hallmark Cards, the Xerox Corporation, and the Eastman Kodak Company. He was driven and successful in his career endeavors, but felt that there was something else he was meant to do.

Michael found inspiration in his wife, Vivien. The couple met during Vivien’s first year of law school, which was the first step in a career dream of her own. Vivien graduated beauty school at age 17, and began an enjoyable 20-year career as a hairstylist. However, she learned a lot about the world through her clients, and began to dream of something more. She’d always admired professional businesswomen, and set her sights on becoming one herself. She already had an AA degree, and attended law school three days a week while working at the salon four days a week. She studied whenever she found time.

Not only was Vivien driven in her goals, but the fact that she went back to school at age 28 was extra inspiring. “Vivien just launched into it,” Michael says, “I realized I was just making up excuses and reasons not to pursue what I truly wanted to do. She inspired me to go through law school. I owe it to Vivien.”

On the day that Vivien went to take the California Bar Exam, Michael signed up at the same law school. Their home soon became a study den with textbooks stacked up everywhere. They motivated each other and found balance between law school and day jobs.

When people hear that Michael switched careers entirely at age 48, they’re curious how he managed it. “I had a goal in mind and took it day by day with one foot in
front of the other!”

Once Michael was licensed by the State Bar and opened his own practice, a chance inquiry led him to Elder Law. A friend’s mother was living at the Motion Picture Home, a highly-regarded facility, at the expense of $6,500 per month. After using the funds from the sale of their family vacation property, all their savings had run out. When Michael’s friend asked the Executive Director at the nursing home for help, he was directed to Medi-Cal. Michael’s friend approached him for guidance, but Michael was just as confused about Medi-Cal rules or where to look.

Both Michael and Vivien got to work trying to get answers, and after researching and attending a conference by a respected attorney, Michael learned enough to realize that he wanted to help seniors by specializing in the field
of Elder Law.
During this time, Vivien enjoyed a rewarding career as a Public Defender. However, after 20 years, she began to miss the creative side of life, and dreamt of a home to decorate with a garden and room to sew. Michael’s Elder Law practice in the LA area was successful, but the couple soon realized how many seniors needed his help in the Coachella Valley. For several years, Michael had an office in both LA and Rancho Mirage, but Vivien and Michael committed themselves fully to their Coachella Valley neighbors, starting a happy new life in La Quinta. There, Vivien is busy enjoying her retirement as president of her HOA, making art quilts, playing golf, and participating in her book club.

“Elder Law is very gratifying and rewarding, one senior at a time, one family at a time, honoring and protecting their loved ones,” Michael says. “Our office teaches middle-class families how to plan for retirement and achieve what’s most important to them: staying in their homes, not going broke, and not feeling like a burden on their families.”

Michael has been an Elder Law attorney and President of the California Elder Law Center since 1997. He’s also a recognized speaker, having appeared on television and addressed national audiences on senior issues. Michael’s radio show “Elder Answers” can be heard Saturdays 10:00-11:00am on KNWZ, 94.3 FM, 970 AM, or online at
www.943KNWS.com/ondemand.

If you have questions about long-term care, financing, or qualifying for Medi-Cal, you can join one of his free workshops to see how to protect yourself and your family. To reach his office, visit his website at www.cal-elder-law.com or call 562-600-0815.