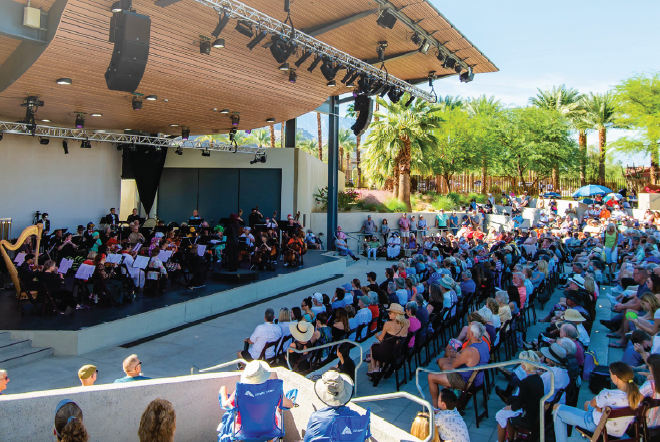 Believe your ears when the strains of a stirring symphony resound in the Rancho Mirage Amphitheater at Rancho Mirage Community Park. The Coachella Valley Symphony is thrilled to present its 2022-23 season in the 1000 plus seat venue giving music lovers a compelling reason to visit the centrally located and picturesque setting.

“We’re excited to follow a centuries-old tradition of playing a relaxed and fun-filled concert of music outdoors,” says Coachella Valley Symphony conductor John Mario. “The Italians even have a musical term for it – all’aperto! It means in the open air.”
These musical events arrive courtesy of a strategic alliance forged with the City of Rancho Mirage which is generously sponsoring the series of concerts. “The City’s partnership with the Coachella Valley Symphony allows us to offer free entertaining cultural experiences for our residents, visitors, and indeed the whole Coachella Valley,” says Mayor Charles Townsend. Upcoming dates in 2023 include January 29th at 2:00 p.m., March 26th at 7:00 p.m. and April 30th at 7:00 p.m.

The CV Symphony is especially fond of attracting concert goers who are attending for the very first time. People who may even think symphonic music is not for them. “Our audience is an integral part of every one of our performances and the Symphony strives to make every attendee feel welcome and engaged,” says John Mario.
The recent Halloween performance serves as a perfect example. Many musicians and members of the audience came dressed in costume. The orchestra performed music from classic horror movies, not to mention the theme from Ghostbusters which featured an audience participation component. It’s the CV Symphony’s habit to introduce each piece of music and to familiarize audience members with its context so both young and old will have a greater appreciation of what the selection is about.
Staying attuned to pop culture helps the CV Symphony achieve a central element of its mission – namely, to perpetuate live symphony music. According to John Mario, there has never been a time when more music is being composed for symphony than present day. “Our concerts give you the opportunity to hear the music to something you’ve already heard many times, up close and in detail as you have never heard it before,” he explains.

The CV Symphony plays a vast variety of scores featuring classics from movies and television and yes, even video games! The Symphony’s January 29th performance at the Rancho Mirage Amphitheater will present the best of stage and screen while its April 30th event will have the orchestra playing along with favorite scenes from Disney® classics. Meanwhile, fans of the Moody Blues won’t want to miss the evening of March 26th when John Lodge, longstanding member of that iconic rock band, will be onstage performing with the Symphony.

It’s fair to say the Coachella Valley Symphony has something for everyone and will pleasantly surprise the uninitiated. Conductor John Mario invites one and all to come experience the vibrant music soaring through the open air this season. Every visit to the Rancho Mirage Amphitheater is well worth it.