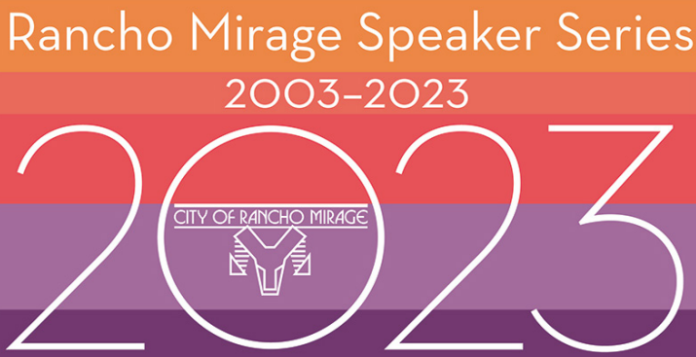 When the Rancho Mirage Speaker Series launched in 2003, it had a modest goal of providing lively dialogue and engaging exchanges for interested residents.

As the series returns for its 20th anniversary, it has established itself as a must-see event for the City, bringing in titans of various industries.

In 2020, the Rancho Mirage Speaker Series reinvented itself as Legends of Sports and brought in renown sports figures for the first time. It started with pioneering race car driver Danica Patrick, followed by football legend Joe Montana. Tennis legend Chris Evert was scheduled for March but, unfortunately her appearance had to be cancelled due to the COVID-19 pandemic.

The upcoming 2023 series will take on even more changes as it moves to a new venue, The Show at Agua Caliente Resort Casino Spa. The city is excited to partner with Agua Caliente Casinos to bring this reinvented signature event to a whole new level. The series will continue with the sports-themed programming featuring hockey legend, beloved sportscaster, and entertainer, Wayne Gretzky on January 23, NFL all-time rushing leader, entrepreneur, and bestselling author, Emmitt Smith on February 21, and closing out the series on March 21 will be boxing legend Sugar Ray Leonard who is a Legendary Boxing Icon, Bestselling Author, and Founder of the Sugar Ray Leonard Foundation.

The 2023 Rancho Mirage Speaker Series stage is set with an extraordinary lineup of intriguing speakers, additional offerings, and new venues thanks to expanded city
partnerships.