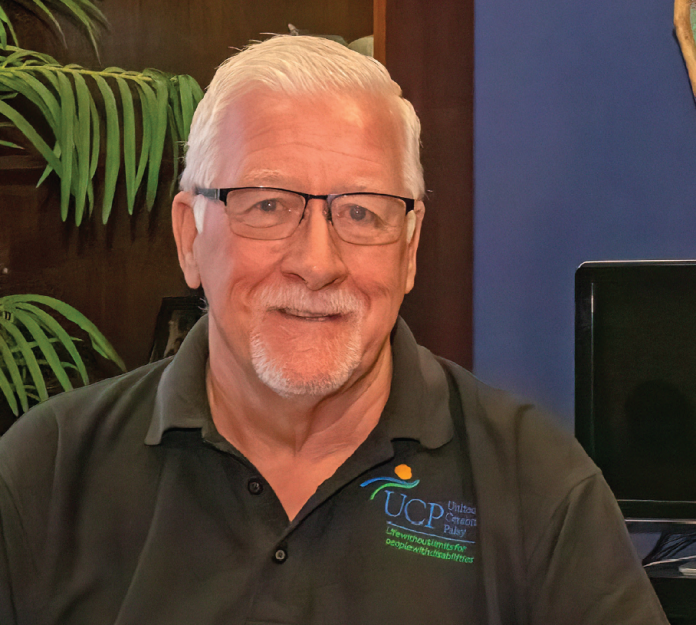 An extraordinary vision for now and beyond, Greg Wetmore, his team and the entire UCPIE community set the bar of a far more positive and inclusive world.

United Cerebral Palsy of the Inland Empire [UCPIE] is an organization that empowers and serves individuals of all disabilities and their families. UCPIE embraces and celebrates each individual’s differences and offers support, resources and opportunities for everyone who becomes involved.

Greg Wetmore, President and CEO of UCPIE, knew at a young age that he wanted to be part of an empowering community that bettered the world and the lives of others. One of Greg’s earliest encounters with individuals with disabilities was on his routine walk to elementary school; every day he passed a building that was designated for children with disabilities. While peering through the windows, he wondered to himself, “Why aren’t these kids at my school too?” This kind of thinking was both ahead of the times and ahead of societal understanding toward those with different physical or mental abilities. While all sorts of disabilities have a long history of stigmatization, society has now made great strides in becoming more aware that segregation disconnects individuals with disabilities from interacting with the global community and disenfranchises the general public of a deeper understanding, compassion and, ultimately, societal inclusion for everyone.

Greg’s life goal was to be a social worker, and when it was time to attend university he graduated with a BA in psychology and sociology. In July of 1994 he began a fulfilling career as Executive Vice President of Goodwill Industries in Toronto, Canada. Goodwill’s mission of building opportunities and employment for everyone truly resonated with him. Greg became President and CEO of Goodwill Industries of the Inland Empire in 1998. When the opportunity to be part of UCPIE came in 2009, Greg did not second guess the opportunity and he is humbled to be part of the UCPIE family. Greg has lived in Rancho Mirage since 2002 and UCPIE is now also located here. Greg thoroughly enjoys the lifestyle in Rancho Mirage, including dining at many local restaurants such as Norma’s, RM Coffee and Joyce’s Sushi. Greg acknowledges the tremendous opportunity Rancho Mirage creates for UCPIE to flourish with all of the individuals who personally face their challenges of being differently-able, to the incredible family members and support networks with hearts and minds that make a world of difference. UCPIE recognizes that everyone deserves to belong, is capable of contributing to the world, and is able to live a fulfilling “Life Without Limits.”

UCPIE’s mission is straightforward, enabling anyone with a disability to live a “Life Without Limits,” yet, however straightforward, it is still a fledgling concept in today’s world. It wasn’t until 1990 that the Americans with Disabilities Act, which attempts to ensure the rights of full inclusion into the mainstream of American life for all persons with disabilities, was passed. UCPIE continues to build the groundwork of a stronger and more inclusive community and offers group activities including karate, crossfit, yoga, movie nights, dancing and other activities. UCPIE offers a large in-home respite program for more than 350 families. Some of UCPIE’s other exciting work is the adaptive bike program which allows qualifying individuals to have a uniquely engineered bike; this program opens even more doors such as UCPIE’S
Team Freedom community involvement with Tour De Palm Springs. Created in 2012, UCPIE’S Team Freedom is the largest team of individuals with special needs in a non-competitive cycling event in the United States.

To get involved and to donate to UCPIE’s cause, visit their website for more empowering stories at ucpie.org. UCPIE is also excited to announce their 32nd annual Bowl-A-Thon coming up on September 10. This event welcomes anyone to join for a day of bowling, friendship, lunch and a silent auction. Lane sponsorships are available and community involvement is encouraged. For information contact Calista Vassios, Donor Development Manager, at 760-321-8184 ext. 101 or email her at calista@ucpie.org.