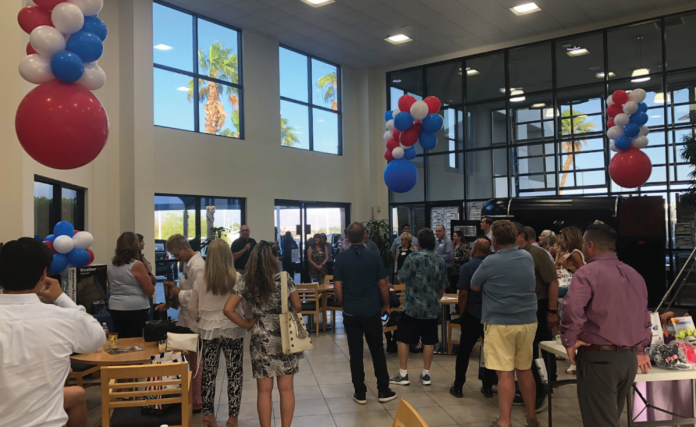 Fiesta Ford in Indio understands the importance of bringing the community together and was pleased to host the Evening Mixer on May 17th in collaboration with the Greater Coachella Valley Chamber.

The evening offered tacos, exotic virgin cocktails and an incredible raffle, but most importantly long-awaited community connection. The open space generated a relaxing and upbeat atmosphere encouraging laughter, smiles, and a memorable night for all in attendance. Gift bags and impressive raffle prizes including complimentary oil changes and vehicle detail packages rounded out the evening. As part of the Indio community, Fiesta Ford is dedicated to giving back to the community and this evening was just one part of their commitment as they also generously support local blood bank efforts and the Boys and Girls Club.

At the end of the mixer, which was attended by 30 local business owners and two dozen guests, Sales Manager Marty Dominguez and Service Director Gary Boldizar shared a few thoughts. Dominguez said he couldn’t be happier to be hosting the event for the first time in three years, and he hoped it was one more step in our journey toward returning to normalcy. Boldizar stated his service department was still overcoming some parts and supply chain issues, but echoed he too felt the worst was past us all and the Coachella Valley was still the best spot in Southern California.
Ford is a mark of true innovation that transformed the world as we know it. It is an American legacy upheld by the team at Fiesta Ford in both their vehicles and impeccable service.

Your Indio Fiesta Ford has exciting new models such as the eye-catching Mustang and the very capable Bronco, with off road features unheard of a decade ago. The best-selling F Series trucks still reign supreme with new hybrid offerings and the cleanest running diesels ever. Yet Ford has never lost touch with its roots, still offering safe and economical family movers like the Escape, Bronco Sport, Transit Connect Wagons and the 4th generation Ford Edge.