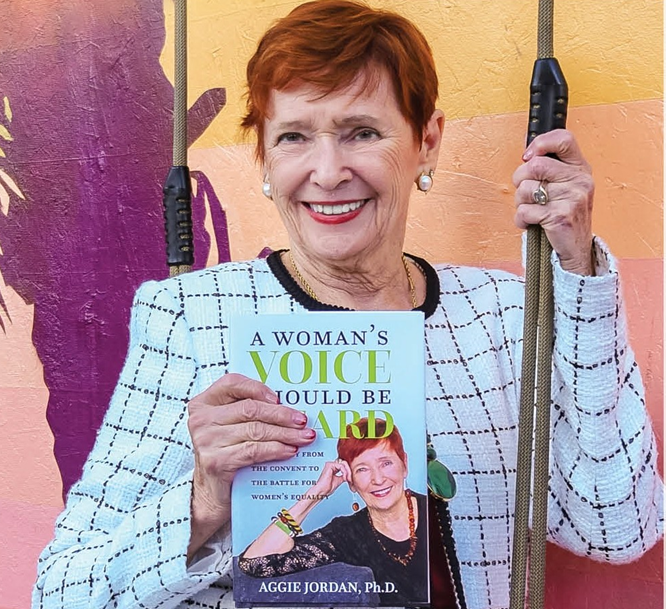 Aggie Jordan, Ph. D. rose from a forward-thinking yet simultaneously suppressive upbringing to become a nun, teacher and entrepreneur. She credits all the influences in her life, both good and bad, that led her to becoming a vocal advocate for women’s equality rights.

While most of us would agree with the title of Aggie Jordan’s book, A Woman’s Voice Should Be Heard, how does that relate to the subtitle, My Journey from the Convent to the Battle for Womens Equality? Like so many women growing up in the 20th century, Aggie’s voice was stifled by her grandmother, her mother, her superiors and greater societal structures. Yet ironically these were also influential women in her life who modeled how important it was for their voices to be heard.

Growing up in an Irish Catholic family created Aggie’s love and respect for the Church and motivated her to join the convent at the age of 17. In a surprising twist, Aggie left the religious life after 14 years to dedicate her life to fighting for women’s equality. “Our lives flow in contradictions and changes. At one unexpected moment, an evolution becomes a revolution.” Aggie explains further, ”The unexpected influence of feminist nuns in graduate school who believed in themselves and in having their and other women’s voices heard… it changed my life.”

Jordan’s insightful book describes her journey from nun to feminist, shares her stories of what influenced her to become a nun and reviews her metamorphosis into a successful and educated businesswoman. Aggie’s book also highlights how important women friends are, how women can be mentors that springboard each other to success, and most of all, how women are using their voices collectively to be heard in facing their futures. Linda Aasen, a resident at SCSHCA, comments, “Aggie’s book will inspire all women (and the men who love them) to seek equality in their lives and their daughters’ and granddaughters’ lives.”

While Aggie now lives in quiet and peaceful Sun City Shadow Hills, her platform is still escalating. She reflects on her history and inspiration that is captured in her latest book, “Writing my memoir was a struggle for me. Some of my fellow memoir writers agree, ‘It’s tough to talk about yourself.’ Many people had questions about my life in the convent. Why did I leave? Why did I enter? What was it like? My answers often did not satisfy them or me.

One day I sat down and attempted to write answers to those questions and then the stories flowed.”

Fellow residents who have already had the chance to read Aggie’s book are finding inspiration. Julie Harris, a fellow resident at Sun City Shadow Hills comments, “You will love the characters in Aggie’s book. I loved her Aunt Mary and her strong women mentors.”

Aggie credits many people including mentors over the course of her life who made a huge difference to her and her platform. “As I reflected on my strong Irish Catholic family and the influence of powerful women in my life – my maternal grandmother, my mother and her sister, my Aunt Mary, even the soft whispers of feminism within the convent – I recognized that I lived with feminists most of my life.” Aggie further pondered, “More importantly, they were women who loved me.”

When it comes to her passion for women’s rights, Aggie talks about how she wants to uplift not only her voice, but the voices of many others. “Finally, I recognized that living through so many women’s equality battles, these stories could inspire women to have their voices heard as well as those of their daughters and granddaughters. This is history to be learned. Recently women’s rights to their own bodies have been challenged and dismissed by the U.S Supreme Court. It is critical for women’s voices to be heard in their votes, in their protests, and in their memoirs. Speak up, my sisters. Your voices are needed.”

Aggie Jordan has also published two other books, The Marriage Plan: How to Marry Your Soul Mate in One Year; and Book of Robert. Aggie wrote a small business column for the former Dallas Times Herald and is currently a feature writer for The View magazine. Aggie lives with her husband, Robert Delaurenti; they have four adult children and six grandchildren who, like their mother and grandmother, believe that women’s voices should be heard.

To order Aggie’s books visit aggiejordan.com. If you would like to reach out to Aggie directly, contact her by E-mail at aggiejordan@gmail.com; or find her on Facebook: Aggie Jordan.