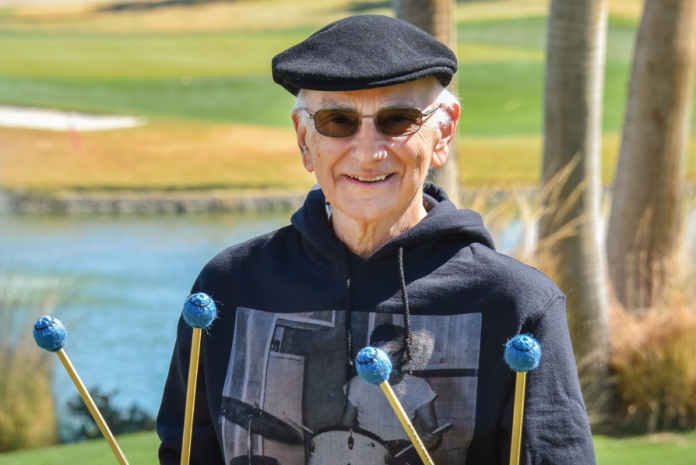 Percussionist Extraordinaire Shares His Talent With a New Generation

Carl’s natural talent for drumming sparked at the early age of three years on a set of toy drums. By the age of six he was playing beats on a real drum set, and with his parents’ encouragement Carl would embrace a lifetime of music and adventure.

Growing up in the heart of the music scene of Queens, NY, Carl practiced his skills while drumming along to his father’s 78 records. He was fortunate to have his talent recognized by his teacher Morris Goldenberg, who encouraged his zest and potential. Once he was eligible for college, he followed his teacher to the Manhattan School of Music where he studied multiple percussive instruments such as the marimba, tympani, xylophone and drums.

Carl’s talent skyrocketed as even in his teens he gigged and performed on live shows from the Catskills Mountains, NY to the Grand Hotel in Michigan; even playing on Herb Shelton Teen bandstand and with Robert Russel Bennet’s, Victory at Sea. “This was an exciting time!” Carl reminisced.

At 26 years old Carl unexpectedly gained a gig at the Iconic Waldorf Astoria Hotel. After being contacted and starting all on the same day, the event would prove to be the beginning of the opportunity of a lifetime! It enabled him to hone his skills and meet the contacts that would propel his career forward.

As one thing led to another and 1970 rolled along, Carl and his wife Karen decided to take the plunge and move to LA. There he gained experience and contacts playing in jazz ensembles, rehearsal bands and eventually for film and television. He also did studio work and composing, started his own groups along with weddings and lots of other gigs.

As 1979 became 1980, Carl earned the distinction of playing on superstar Frank Sinatra’s epic album “Trilogy: Past, Present, Future.” Working as the percussion lead on “Future,” Carl spent two full days and nights on the project, a unique and unforgettable experience.

As Carl’s reputation soared and his love of music and passion for learning grew, teaching was the next natural step. Carl followed suit and taught at Cathedral City High School and continues to teach part-time at the College of the Desert. Over the years he has had the pleasure of witnessing many of his students go on to become professional musicians themselves.

Armed with many dynamic stories from years well lived, in 2018 Carl Rigoli wrote his book, a memoir called “Drumming Along with Carmelo,” in which he entertains his readers with his humor and wit. His recollections of colorful beginnings being brought up in an Italian American family, including all the facets of being a working musician, and the trials and tribulations of teaching, are a testament to his career and his passion for music.

For all the places he has been and people he has met, after 57 years of marriage Carl and Karen both love California. Monterey and the Desert hold special places in their hearts.

Now, semi-retired in Shadow Hills, Carl continues to create and teach while experiencing the beauty of the desert and enjoying the pace of life (slightly slower now), golf, the many restaurants, writers group, swimming, walks and being part of this amazing community.