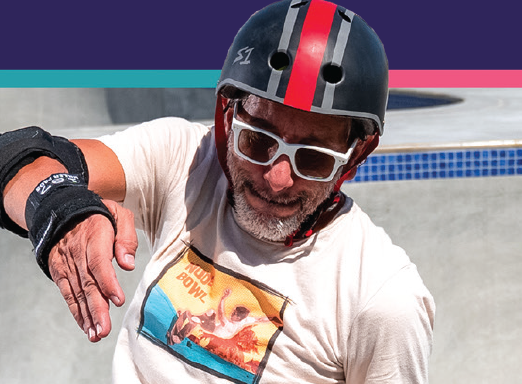 It was the summer of 1975 and a young Eddie Elguera found himself staring at a skateboarding magazine in a liquor store. There was just something cool about the picture on the front cover of a guy skateboarding in an empty swimming pool.
He was instantly hooked. “I thought to myself, ‘Man I want to do that one day,’” says Elguera. “My brothers were older so I was never allowed to hang out with them. But they had a skateboard, so I picked it up and kind of went on my own and cruised around the neighborhood.”

The Road to Pro

Growing up in the mountains of Lake Arrowhead, California wasn’t exactly the best place to learn skateboarding. “I would convince my brothers to take me to different places to board because I wasn’t able to drive yet. I began to progress pretty quickly from there,” Elguera says. “As we got older they began to have other interests, but I stuck with skateboarding.”

In 1978, Elguera began competing as an amateur when he was around 16 years old. By 1979 he became the U.S. Amateur Skateboard Association champion for pool skating. He then joined the professional circuit.

“I remember my first pro contest. I had never traveled on a plane before,” says Elguera. “It was very exciting because I was skateboarding with all these pros who I would see in the magazines. They were kind of my heroes. I remember thinking ‘Okay I want to meet these guys and I want these guys to like me.’”

Elguera won the 1980 Gold Cup Series for the second year in a row with the help of his coach, Dale Smith. Together they invented tricks like The Elguerial, Frontside Rock-n-Roll and Frontside Invert.

He earned the nickname ‘El Gato,’ Spanish for ‘The Cat,’ referencing his Hispanic background and his ability to land on his feet whenever he fell.

“I was at the top of my game. I was winning competitions, I was in magazines and music videos, I was traveling the world skateboarding, but yet even when I would win a contest I would have an emptiness,” Elguera says.

A Call to Faith

In the early 80s Elguera had pretty much given up skateboarding. He began working at a family restaurant in Blue Jay, California, drinking and partying constantly. One afternoon, a lady came into the restaurant and began to share her faith with Elguera. The conversation eventually led him to become a born-again Christian.

Elguera started going to church, where he met his wife, Dawna, and they eventually had three sons together.

“I gave my life over to God that day in the restaurant,” says Elguera. “That’s when my life moved forward. God began to speak to me to get back into skateboarding and share this gift and talent with others.”

For three decades, Elguera used skateboarding as a kind of ministry to connect with youth and share his story as a youth pastor. In 2006 Elguera and his wife stepped out in faith and planted a church in Palm Springs called C3 Church. “I had always told people I was called to the younger generation. But God was telling me that this generation is now adults, and they need my help,” says Elguera.

Now in his 50s, Elguera still competes around the world in legends divisions alongside Tony Hawk, Steve Caballero, and Christian Hosoi. He created the El Gato Classic to bring together the legends of skateboarding. The event takes place November 11-12 in La Quinta at the new X Park which he helped design. Elguera also has his own line of skateboards and apparel.

In 2016, he was inducted into the Skateboard Hall of Fame.

“Skateboarding has taken me all over the world globally multiple times over,” says Elguera. “It is amazing to see that a skateboard would be able to do all this for me.”