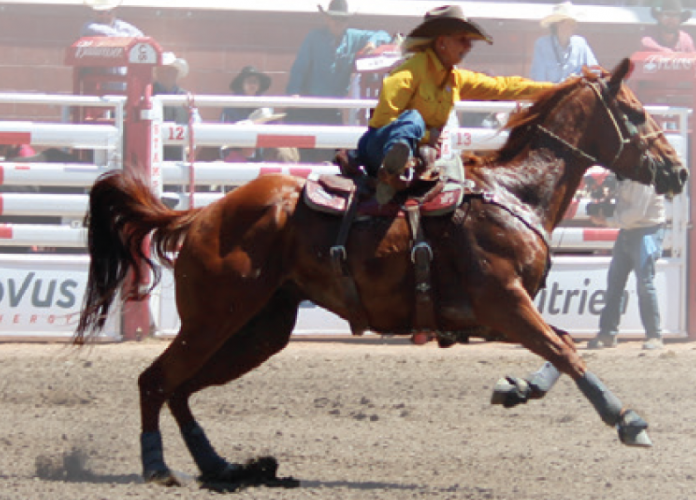 At the age of 59 Shelley Holman, a Californian Barrel Racer, continues to inspire crowds around the world. From winning the Alberta High School Barrel Racing title in 1979 to competing in world renowned rodeos, such as this year’s Calgary Stampede, Shelley and her horse named Red are not planning on slowing down anytime soon. “I had a successful year, ending up sixth in the California Circuit and 67th in the world standings,” Shelley beams. “I did not intend to compete outside of California, but God had a plan for me, and my lifelong dream came true, at age 59! Now a WPRA Gold Card Member, my name was on the list to compete at the Calgary Stampede alongside my grandson Lefty Holman who was competing in the Saddle Bronc Riding.”

Competing at such a big rodeo was intimidating for Shelley, but fueled by her lifelong hard work, determination and supportive family Shelley put her best foot forward.

“Red ran our fastest time of the week placing us third, just short of moving on to Sunday’s Showdown this year,” Shelley noted.

To Shelley, this year’s event became even more meaningful than just a race. Since her dad at age 87 was not well enough to make it to Calgary to watch her run, he watched on his TV in his room at Strathmore Sagewood Assisted Living. “After my final race my precious dad passed away that night in his sleep,” Shelley said through tears. “I am forever grateful that I had the opportunity to run at the Greatest Outdoor Show on Earth and see my dad in his last days, the man who always had a horse in the pasture for me and hauled me to many rodeos when I was young, encouraging me to be the best and go after my dreams!”

“I encourage anyone at any age to continue to do what you are most passionate about, even if you’re not #1,” Shelley explains. “What counts is embracing what makes you happy, which makes a world of a difference to those around you and those you love.”

If you have an inspiring story you’d like to share in the Sun City Insider magazine, email us at production@thedesertinsider.com