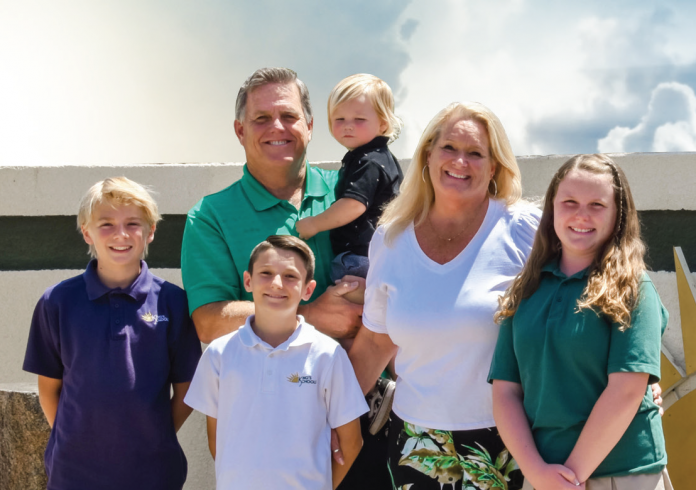 From your first step onto the King’s Schools quaint and welcoming campus, you’re sure to echo the sentiments of students, parents, and visitors who have personally experienced the peaceful and serene climate. The divinely framed iconic backdrop of the San Jacinto mountain range serves to them as a reminder of God’s handiwork. Every morning when the opening bell rings, the entire school gathers around the flag for their signature student-led Pledge of Allegiance, Christian flag pledge, prayer, song, and morning charge from the Founding Headmaster, Don DeLair.

Since 1994, King’s Schools has provided Preschool through 8th grade students a safe, loving, and nurturing learning environment. The vision for King’s Schools started on the front porch of Don’s home in Hawaii in 1969 when his mother expressed the difficulties she was facing as a public school teacher to her, then, 10-year-old son. Wanting to console his mother, Don vividly remembers promising that he would one day become a teacher and work his way up to owning his own school. Don grew up with a textbook alcoholic father, but he found great solace, strength and motivation through his newfound faith in God at the age of 12.

Don’s prophetic statement as a 10-year-old boy to his mother in 1969 is a testimony of how he first became a teacher at Army Navy Academy in Carlsbad, CA, then became a principal at 28 years of age at Marywood Country Day School in Rancho Mirage, then, in 1994, he cut the ribbon on opening day to his own school on Bolero Road off of Golf Club Drive and Hwy. 111. Don’s mother, Patricia, wholeheartedly volunteered at the school for many years and now resides in Del Webb, Rancho Mirage.

Don and Shery describe King’s Schools as an “out with the new…in with the old” traditional learning institution where students are expected to work hard with no excuses. Boys are taught to be gentlemen, girls are taught to be ladies, and boys are expected to treat girls like ladies. “Respect is huge at King’s and we have a reputation of being a very polite, well-mannered, and respectful school. Just ask anyone who works at the McCallum Theater about the students at King’s Schools.” The virtues of respect and courtesy are seen when assigned ambassadors in every class greet visitors with a smile, handshake, and welcoming words that reflect a genuine pride in their school. Shery states, “Our students love God, they love each other, they love our country, they love learning, they really love their school and, bottom line, they love life. It’s so foreign, yet very refreshing, to experience the environment at King’s that can only be appreciated by visiting the campus.”

King’s also stands alone in its commitment to making their education as accessible as possible, which includes a lot of students whose parents find it difficult to afford the tuition. “We believe every child not only needs, but deserves, the opportunity to come to King’s!” Their “Every Child Deserves” Scholarship Program started in 2003 and, to date, has sponsored over 1,200 deserving students who have gone on to become successful in higher education, professional careers, and as responsible adults leading their own families. Don states, “It’s a real joy to see the impact on both the students and the sponsors through this very unique scholarship program. We have a record number of students needing financial assistance next year and we invite anyone interested in possibly becoming a sponsor to visit our campus.”

If you’re interested in visiting the campus on a tour, possibly sponsoring a student, or learning more about Don and Shery’s journey, go to www.kingsschools.net or call (760) 324-5464 for more information.